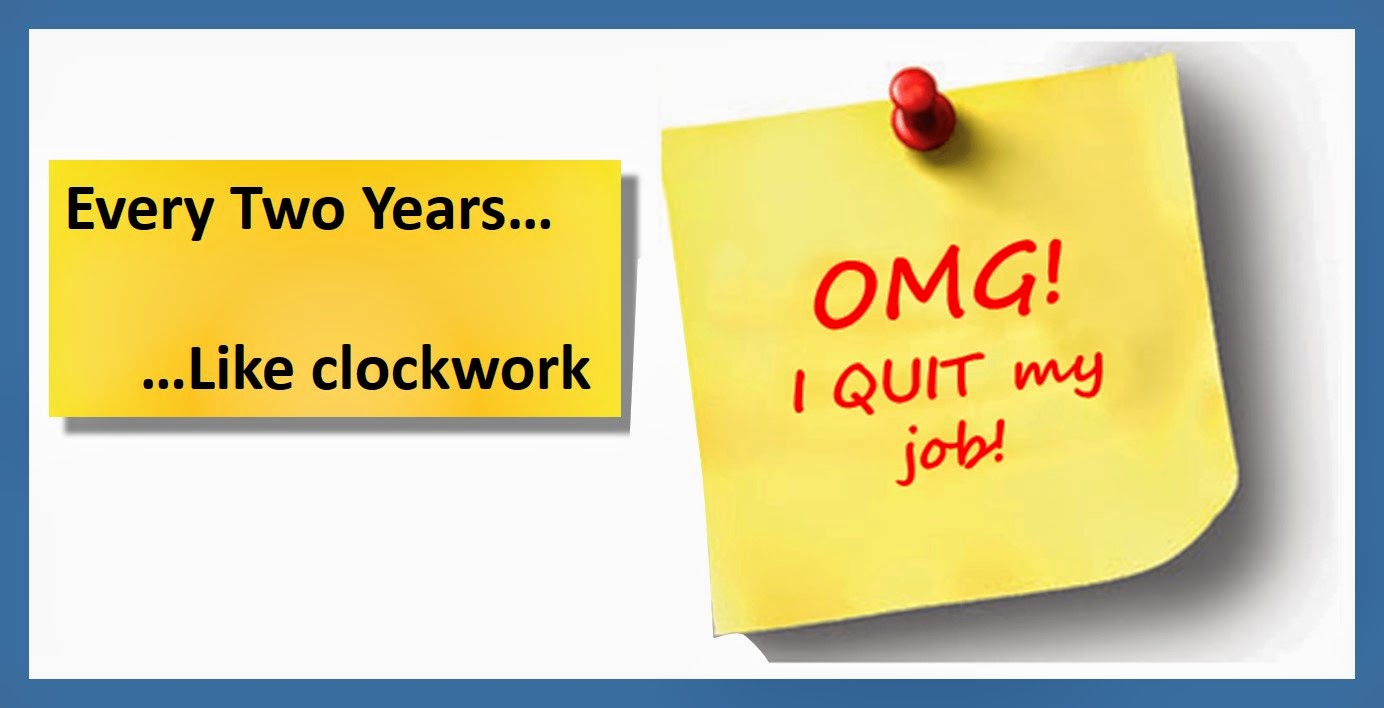 THE STORY
Over the course of my long career, I’ve been through a lot of job interviews—from both sides of the table. Whether I was hiring or trying to get hired, I’ve seen the same trend—the average length of an employee’s stay at a company has shrunk.

Now, people label you as a loser if you spend more than three years at a company. Today, if you stay at the same place for over three years, you’d better have a good story to explain why you stayed so long. The general rule now seems to be to get out in two years.

If you don’t believe me, take a look at a handful of resumes on Linkedin. As you go through the career time-lines, most resumes will have the time spent at a given company get shorter and shorter as you get closer to the present.

It’s almost as if people’s careers have a half-life (like uranium). Each succeeding job is half the life-time of the time spent at the prior career location. It’s gotten to the point where about the only difference between a short-term consultant and a short-term employee is who is paying for the health insurance.

THE IMPLICATION
Traditionally, strategic planning has been concerned with creating a great long-term future for your company. But, if the key people only plan on sticking around for about two years, where is the incentive to work hard on building long-term improvement? Even for a five-year plan, a two year employee will have changed companies twice before the plan horizon is completed. For a ten-year plan, the two-year employee will have changed companies five times before the plan is over.

In this environment, the person setting up the long-term plan is not incented to do it well, because they won’t be around long enough for it to matter to them. And the replacement person who inherits the strategy two years in has no emotional attachment to the plan built by people no longer there. Usually, they abandon the predecessor’s plan before it gets traction and start the process all over again. So you end up with a lot of half-hearted planning starts, but no pursuit to the end.

As a result, I’ve witnessed strategy get perverted into something that has nothing to do with long-term planning. It’s just a tool for an employee to get a quick bullet point on the resume in order to get the next job. And that’s not good for the company’s long term health.

RESULTS
Instead of real, long-term plans, one tends to get one or more of the following:

1. Lots of M&A
If you want to create a big bang in a short time, make a big divestiture or acquisition. It’s the biggest impact you can have in the shortest amount of time. That’s why activist investors are always pushing to restructure companies—it’s the fastest way to push a change in the stock price. Being part of large deals like that also looks good on the resume—a big accomplishment in a short period of time.

Lately, there has been a steep rise in the amount of M&A and restructuring activity. I think one of the factors pushing the volume up is the short time horizon of the two-year employee.

“Strategy By M&A” may initially look impressive, but it is rarely the best long-term approach as the primary force of strategy. Here are some of the pitfalls:

a)     Most acquisitions fail
b)     There is more money chasing deals than there are good deals, pushing up prices to levels where it is difficult to get a good return on the deal.
c)     When you pay a premium for an asset, you are giving a lot of the upside cash potential to the seller, while still keeping all of the future risk for yourself.
d)     What cash doesn’t go to the seller often goes to lawyers and deal-makers. This further shrinks the potential return for yourself.
e)     The tough part of the deal is the integration phase, and the short-timers won’t stick around long enough to make sure that gets done properly.
f)      A lot of what you buy in a deal is their employees. If their employees don’t stick around, what have you really purchased?

2. Bring Cash Forward
Another way to look good quickly is to take a long-term cash flow and compress it into a short-term cash flow. For example, a lot of state governments in the US decided to sell their toll roads to private companies. That way, instead of waiting decades to get their hands on the toll money, they got a big check up front. Boy, does that ever look good on the resume to claim that you got all that cash in such a short period of time.

That’s why a lot of retailers, most recently Sears, have been selling their properties to mall developers and then leasing back the property from them (called a “sale and leaseback”). They get a big check right away from the developer. Similarly, I recently heard that Ohio State University sold all of its parking structures to a foreign company for a huge paycheck. What a great photo opportunity to be shown giving the company such a big check.

The problem with this approach:

a)     The buyers are not benevolent people. They expect to get a handsome return on that investment. Therefore, you will never get paid what the asset is worth—you will get paid its worth less the profit the buyer expects to make.
b)     If the deal goes sour in the future, the buyer will stick it to you in the future with higher rent payments. When Sears owns its property, it has frozen its destiny. Now that it rents, it does not control its destiny.
c)     Even if you get someone else to pay the rent (like drivers for toll roads and students for college parking) these other people will not be happy if they are taken advantage of by the escalation of fees by the new owners. Who wants the fate of their customer satisfaction in the hands of people who don’t care about whether your customers are satisfied?

3. Playing Politics
Politicians love creating laws or deals where the tough parts don’t occur until after they leave office. That way, the nastiness messes up the career of the next office-holder, not them.

Short-term employees are increasingly borrowing this tactic from the politicians. They are pitching plans where the big costs and/or big benefits are not to occur until after the time where they plan to leave. That way, the negative impact of the big costs (which have been pushed out) won’t hurt them. And because the promise of the big return is pushed out, the disappointment when the return is less than promised doesn’t hurt them, either. They can blame that disappointment on the bad execution of their successor.

The goal here is not to make the company better long-term, but to just push the bad stuff and disappointments out a little further, so that the next guy gets the blame.

In an earlier blog, I went into more detail about the problems of “hockey stick” plans that push everything into the future.

4. Project Orientation
One thing that looks good on the resume (and can be done in a short period of time) is the completion of projects. You can point to a completed task and say, “Look, there is something I did.”

But completing projects and moving a company forward are not necessarily the same thing. If all you want to do is check it off a list of “projects to do,” then your goal is to get it done rather than try to move the company forward.

For example, you may have a project of building a mobile app for your company. Well, just because you got an app up and running does not guarantee that it will help the company long-term. In fact, the best way to guarantee that you get the project done quickly is to dumb it down into something simplistic and not very useful. Trying to get the project integrated into the business where it impacts operations is very messy and time consuming. It increases the risk that the project won’t get done (so you cannot put it on your resume). Therefore, the incentive is to not make it very useful.

SUMMARY
Long term planning is very difficult to do when the key people only want to stick around for about two years. These short-timers will try to hijack the long-term planning process for their short-term interests. They will try to steer the process into:

Watch out for these tricks. They rarely lead to the best long term future.

FINAL THOUGHTS
You harvest what you sow. If you are not planting any seeds for the long term, there will be nothing to harvest in the long term.

Posted by Gerald Nanninga at 9:41 AM