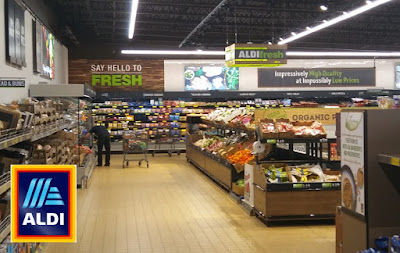 Today I went to the grand re-opening of an Aldi store. As you probably know, the reason for Aldi’s existence is to offer a limited assortment of groceries in a bare-bones, no-frills environment. By cutting all the costs of assortment and frills, they can offer their food cheaper than the competition.

Well, the newly grand-opened Aldi moved the store a little bit more up-market. The fixturing and signage looked a lot nicer. It didn’t feel as “no-frills” as it used to.

What’s this world coming to when a store whose success is based on a no-frills image decides it has to look a lot nicer?

THE ANALOGY
Aldi claims that they need to make their stores nicer because the competition is making it harder for them to provide prices low enough to get enough customers to put up with the low-frills atmosphere. Almost everybody sells groceries at low prices now, so Aldi can’t create a price gap sufficient enough to get lots of people to give up the niceties of the other stores to go to Aldi.

This is typical of a market in maturity. It gets difficult for companies in mature markets to make the old levels of profitability using the old models that made them a success in the first place. So the companies start tinkering with the formula. If they are not careful, the tinkering may end up destroying the business model.

Is there really a place for the “More Upscale No-Frills Store”? I guess we’ll see.

Why should we care about this? Well, the overwhelming majority of companies are in mature businesses. They have pressures to rebuild profitability and growth. Those pressures could lead to the kind of tinkering that—instead of fixing things—ruins things.

The major problems in maturity are threefold:

1) Over Capacity (Too Many Competitors)
Barriers to exit can be so high that mature industries can end up with too much capacity. I saw a statistic a while back that said that there is so much excess manufacturing capacity in the automotive industry that there is no scenario that would allow you to get enough auto sales to have all those factories running near capacity.

Not only is there too much production, but too many brands and companies fighting in the space. When you spread all that overcapacity over too many companies, you end up with a lot of companies that are teetering on the edge of bankruptcy.

2) Too Little Growth
The over-capacity and over-abundance of companies might not be so bad if the market was growing rapidly. Unfortunately, there is very little growth in mature industries. Often, the costs of doing business in the mature industry may be growing faster than sales. This is a formula for disaster.

3) Not Enough Differentiation
By the time you get to maturity, all the weak players are gone. The remaining companies have a quality offering in the marketplace. In fact, the remaining players tend to have fairly similar offerings. They are all good enough to be a viable option, but not different enough to get significant preference over the alternatives. They are almost certainly not different enough to command much of any price premium.

Two Disastrous Outcomes
Low growth, overcapacity and insufficient differentiation often lead to two disastrous outcomes. Either you get into a profit-destroying price war or you make compromising changes to your core strategy that can destroy your reason for being (like trying to be the upscale low-frills alternative). By trying to be more things to more people, you can end up being adequate for many, but best for none.

Better Alternatives
Here are some better alternative strategies when faced with maturity.

Alternative #1: Flee the Industry
Just because an industry is mature does not mean your company needs to be mature. You can shift your portfolio to areas less mature. GE has succeeded for over a century by constantly shifting its portfolio. It routinely leaves problematic mature businesses and adds businesses that are less mature. (I spoke more about this concept here and here).

The more mature an industry gets, the less valuable a company in that industry tends to become. Therefore, if you want to get out, get out early, when you can command the highest price for your business. Early exit is often the best alternative.

Alternative #2: Consolidate the Industry
If you are the market leader, the best approach may be to accelerate the consolidation of the industry. Do what you can to reduce the number of players and the amount of capacity. This often requires buying up a lot of the more marginal players. At the end, you may end up with a near-monopoly.

Even in a very mature business, you can usually make money if you have a near-monopoly. This was the approach taken by Macy’s in the US. It essentially bought up all the major full-line department store brands, closed a bunch of them down, and converted all the rest under the single brand of Macy’s. Now it has a near-monopoly in the space.

Alternative #4: Create a Mature Infrastructure
There are a lot of costs involved in running a business operating in a growth industry. Many of these costs are no longer necessary when a market hits maturity. Places to cut can include:

You can probably get away with lower-priced executives across the board, too. In essence, you make your headquarters as no frills as Aldi’s stores used to be. By gutting the headquarters, you can now survive on the amount of business and margins a mature market provides.

A few years back, Home Depot got a big bump up in profitability when they decided to essentially no longer build new stores. They got rid of all the costs associated with new store growth (including the cannibalization of sales from older stores). When they eliminated all those costs associated with growth, it all flowed to the bottom line.

In another example, who do you think bought up all the Fast Moving Consumer Product Group brands when the big, bloated companies divested all the marginal and most mature parts of their portfolios several years back? It was the no-frills companies who were built specifically to survive in maturity, like Pinnacle Foods.

This type of strategy has to be more than just cutting costs. It needs to include changing the corporate culture to embrace no-frills management. Otherwise, the costs will just creep back in.


SUMMARY
The conditions of a mature market tend to severely squeeze industry profitability. This can force a company into considering a change to their strategy. But not all change is good change. Bad change is to start price wars or damage your appeal by trying to be everything to everyone and end up not being preferred by anyone. Good change includes strategies like fleeing the industry, consolidating the industry, moving from mass to niche, or redesigning your infrastructure for maturity.

FINAL THOUGHTS
I had stopped writing this blog last year because I thought strategic planning had gotten too mature and did not need this blog any more. However, I got some feedback asking me to bring the blog back, so I will periodically add new blogs. Thanks for your support.