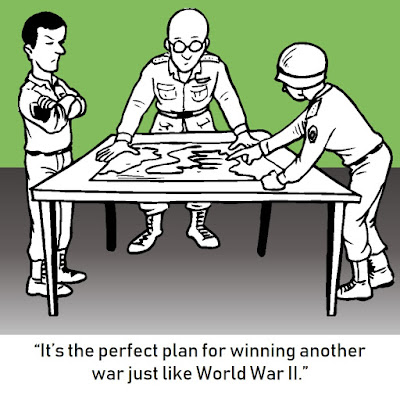 THE STORY
There’s an old military saying that goes something like this: In peace time, military leaders prepare for the next war as if it is going to be played by the same rules as the last war. Unfortunately, each new war comes with a new set of rules, making all that planning obsolete.

In other words, instead of looking backwards to figure out how you could have done better in the last war, anticipate the rules of the next war and prepare a way to win under the new rules.

THE ANALOGY
This recommendation does not only apply to military strategy. It also applies to business strategy. The rules of the game in business strategy keep changing, just as in warfare. The leaders in many businesses are older and got to the top by following the old rules. As a result, these leaders have a tendency to prepare for the future by falling back on those old rules which made them a success in the first place.

THE PRINCIPLE
In my opinion, we seem to be at a point where the rules of strategy are shifting again. This would be the third major set of rules during my adult lifetime. If the rules are changing as I think they are, then it is time for strategists to update their mindset again.

Ruleset #1: the Three P’s
Back for most of the latter half of the 20th century, the rules of strategy revolved around what I called “the 3 P’s.”

During this period, the major strategic objective was to maximize cash flow over a sustained period of time. The best way to do this was by focusing on three areas:


1. Positioning: The idea behind positioning was to convince consumers to associate your product/brand with being the superior solution for a meaningful problem. Make the problem and your solution inseparable in the consumer’s mind so that no other brand can unseat you as the best way to resolve the problem. For example, different brands of toothpaste became associated with different solutions: Crest for getting rid of cavities, Sensodyne for sensitive teeth, Plus White for smokers, Colgate for healthy teeth and gums, and so on.

2. Pursuit: To hold a position over the long haul, a business had to act quickly and invest in whatever it took to maintain that position. For example, Walmart wanted to hold the position of being the low price alternative, so it would invest in whatever retail format had the advantage in holding the low price position. That is why Walmart migrated from discount stores to supercenters and added Sam’s Club. It was pursuing the winning path to hold the position.

3. Productivity: To maximize cash flow, the cost of investments in positioning and pursuit had to be less than the profit margins available from the business. Therefore companies also kept a keen eye on keeping costs down, pursuing tactics like re-engineering.

Ruleset #2: The Three F’s
As the 20th century was winding down, a new strategic ruleset was evolving. One of the key forces behind this change was the movement from selling physical products (atoms) to selling apps. This was the world which spawned companies like Google & Facebook (and all the people that wanted to copy their success). Under the new rules of that era, there was a new major strategic objective. Instead of trying to maximize cash flow over the long term, the objective was to maximize the selling price when you flipped the ownership.

Not only was the idea of maximizing cash flow out, the entire idea of profits lost favor. It was okay to lose money so long as a future buyer would pay a lot for your business. In other words, your return did not come from the ongoing business but from what you could make when the business changed ownership. I spoke about that in more detail here.

And the idea of managing for the long haul was also tossed out. After all, if you are going to flip the business to a new owner in a few years, your time horizon is only as long as it takes to cash out.
In this new environment, the strategic rules were as follows:

2. Flex: In the wild world of apps, one has to keep flexing the model until a version is found that resonates with a critical mass of users. Venture capitalists of the time knew that the end product app was rarely the same as what was originally pitched to them to get the money. Therefore, the venture capitalists were betting more on the flexing ability of the founders to eventually hit on a winner rather than on the original pitch.

3. Flip: Since all the value is created at the time the ownership changes, the strategic emphasis is on optimizing the flip—who to sell to and for how much. For example, a lot of people of the time thought that Cisco Systems might be a good potential buyer. Cysco said it would only buy businesses located in Silicon Valley CA, Austin TX or Research Triangle NC. Therefore, if you wanted to flip to Cisco, your strategy would be to locate in one of those three areas. If your plan was to sell out via an IPO, the strategic emphasis was placed on maximizing those factors/metrics which would sell well in the IPO pitch.

Ruleset #3: The Three S’s
Just as people were getting used to this set of rules, it appears to be changing again before our eyes. There are many reasons for this. First, future innovations do not appear to lend themselves to start-ups in the garage. They are too complex and costly. Starting small and flipping no longer works as well.

Second, the innovations of the digital age have sucked a lot of the value out of entire industries. For example, the news and entertainment industries have seen the overall profits of the whole industry shrink dramatically. When people expect things for virtually free, it is hard to rake in huge profits. A new way to move money in your direction is needed.

Third, the more recent flips in general are nowhere near as dramatic as in the days when Google and Facebook flipped. If flipping is much less of a “sure thing”, investors will hold back and IPOs won’t be as easy to create. The whole idea of flipping is being questioned as a primary way to think about business. You can’t sell to investors if they aren’t investing in the old type of startups like before.

So what is replacing it? I call it the three S’s.

In the world of the 3 S’s, the key objective is to exert maximum control/power over an entire business ecosystem. It is no longer good enough to just have a good product or a leading app. You need to control the entire business system in which you exist. If you do not control how the ecosystem evolves, it will evolve in a way that blocks you from achieving adequate profitability. Power becomes the great goal, because power dictates where the limited amount of money goes.

1. Size-Up: This strategic approach requires thinking big. You need to not only size up the space you compete in, but the entire ecosystem your space lives within. This includes not only your traditional competitors. It includes anyone who has influence on how your ecosystem will evolve and how ecosystem profits are divvied up. It can include governments, businesses and advocacy groups. You need to size it all up to get your arms around the magnitude of the ecosystem.

2. System: Your strategy must encompass more than just how your business works. It has to encompass how you want the whole ecosystem to work. You have to strategize for the entire system. Your best individual performance will still leave you in trouble if the ecosystem defines the rules against you. Therefore, you have to make sure you have a powerful seat at the table where the rules are made. And you only get such a chair if your planning takes an entire system point of view.

3. Structure: To get the system to work in your favor, you have to help determine how it is structured. You have to put all the ecosystem building blocks together into a structure where you have a disproportionately larger influence than others. Some of these building blocks you will own. Others will be partnerships. Others will be voluntary followers of your plan because your power makes it in their best interest to comply with your wishes.

Here are some recent examples of this type of strategic approach:

1.      CVS: CVS realized that it needed to be more than just a major pharmacy/drug store chain in the US. It needed to have control over the entire healthcare ecosystem. To accomplish this, it started in 2006 by acquiring MinuteClinic, who operated health care facilities inside a retail setting. This gave CVS some control over the practice of medicine. In 2007, CVS acquired the Caremark pharmacy benefit management company in 2007. This helped them have influence over how company pharmacy benefit plans would impact CVS. In 2015, it acquired Omnicare, a leader in pharmacy distribution to institutions. And this year, CVS announced the acquisition of Aetna, one of the leading health insurance providers in the US. CVS is no longer a drug store company. It is a strong player throughout the entire healthcare ecosystem. It even changed its name to CVS Health.

3.      Another recent announcement include the merger of Ascension and Providence to create the largest hospital chain in the US. It is like CVS in that it is trying to exert more power in healthcare. It is like Disney in trying to get such a large chokehold over a major aspect of its ecosystem that it becomes a force that cannot be ignored. In their words, they are trying to create a voice “that can’t be ignored.”

And Target recently announced the purchase of Shipt. Shipt is one of the largest providers of the software and trucks used in the home delivery of items like food.  In this way, Target is expanding its influence in the consumer retail ecosystem by getting a big share of the out-of-store experience.
This is just the beginning….


SUMMARY
The environment is always changing, so the rules of strategy must adapt. We’ve moved from the 3 P’s to the 3 F’s. Now we are moving to the 3 S’s. If you’re still doing your strategy under the older rules, you may lose your grip on the future and be left out in the cold.