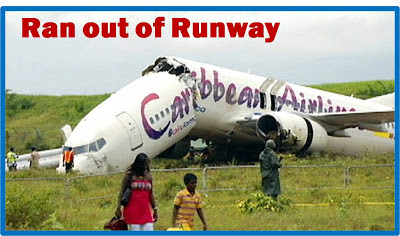 THE STORY
I used to live in a city which had a small regional airport.  The city wanted to get more of the large airlines to land at this airport, but the airlines kept refusing.


After hearing the complaints, the city invested in building longer runways.  And not long after the longer runway was built, a large 747 jumbo jet landed at the airport in grand fashion.


I think it was many, many years later before the second large jet landed there, but it didn’t matter.  The renovations and the longer runway resulted in getting more scheduled flights at the airport.

THE ANALOGY
I like to use the term “landing a strategy.”  This concept refers to getting a strategy from being just a cool idea floating in the clouds to being a reality playing out on the ground where the company is operating.


Landing a strategy is a lot like landing an airplane.  If the airport’s runway is too short, the larger jet will not be fully landed before it runs out of runway.  The plane will keep moving at a high rate of speed beyond the edge of the runway and crash into something, creating a total disaster.  That’s why airlines insist on having long runways before committing to an airport.


It takes a lot of time and money to land a strategy (to get it from idea to reality).  If you run out of time and money before the strategy is fully landed, you are like a pilot in a big plane that ran out of runway.  Your strategic attempts are about to go off the runway and crash into something, creating a total disaster.


Due to our optimism, we may think we need a shorter runway (less time and money) than we really need to land our strategy.  As a result, we may already be well into the strategic transformation before we realize that we are trying to land our strategy at an airport (i.e., company) whose runway is not long enough (not enough time or money to finish the transformation).  Then we find ourselves frantically trying to lengthen the runway at the same time our plane (i.e, strategy) is already approaching the runway.  That’s not a very wise approach.


When a strategic transformation runs out of runway, the worst possible scenario occurs.  The old strategy is bankrupt because all the time and effort and money went into the transformation.  The old strategy is too obsolete to create sufficient cash flow to keep the transformation going (running out of money). The time for bankruptcy under the old model keeps getting closer (running out of time).  Yet, because there is not enough time and money left to finish the transition to the new strategy, you don’t end up the replacement strategy, either.  Instead, you are stuck with neither strategy.  A total disaster.


Think about Kodak.  It didn’t start trying to land a digital strategy until the analog business was almost dead.  The old analog business was not producing cash flow and was soon to die (no time or money).  As a result, Kodak’s runway was too short.  They ran out of time and money before a digital strategy could be landed.  The company ran off the runway and imploded.

The airlines in the story had a safer approach.  First make sure the runway is plenty long enough.  Then, only after the long runway is built, will the airlines consider trying land planes there.  Our strategic approaches could learn from this.

THE PRINCIPLE
The principle here is about change management.  Nearly all new strategic initiatives require significant change in the business in order to become reality.  You may have a great new strategy, but if you mis-manage the change process to get there, you will not effectively land the strategy.  It will crash and make a disaster.


If you cannot effectively land the strategy, it is irrelevant how great that new strategy was.  It will crash when you run out of runway, just like a bad strategy.


Therefore, a key piece of change management needs to be assessment of the length of your runway.  If the runway isn’t long enough (not enough time and money), then the process is doomed.


Option #1 Lengthening the Runway
If the runway is too short, one solution may be to lengthen the runway.  In other words, before embarking on the transformation, look for ways to either:

These actions may not have any direct relationship to the change you are trying to accomplish, but if you do not do them, you will not have enough time or money to do those things which directly relate to the change.  So you need to do them as well.


Tactics to lengthen the runway could include:

One of the main reasons why Ford Motor Company did not have to go through bankruptcy and government bailout while GM and Chrysler did was because Ford had taken many of these types of steps to lengthen their runway prior to the great recession.  As a result, Ford’s runway was long enough to last until they could transition through the economic recession and get to their revitalized strategy.


GM and Chrysler ran out of runway because they did not do enough of these types of things.  Without a lot of outside help, they would have crashed when their runways ran out.


Option #2 Shortening the Plane
If lengthening the runway is not enough, you can try to switch to a smaller plane.  By this, I mean that instead of trying to create massive change all at once, you can chop up the change into smaller bundles (like smaller planes) which require less time and money to land (and thus can use a shorter runway).  Those smaller changes with the quickest payback can be done first and create the new money and extra time needed to land the rest of the transformation.


Thus, you fund the latter change by strategically creating funding via the early changes.


Netflix was originally designed to be a digital downloading service (which is why the company was called Netflix instead of Mailflix).  However, the company realized that it would take massive amounts of time and money to create the Netflix model.  Therefore, Netflix started with a smaller plane (movies by mail).


Movies by mail required less time and money to start up.  And it got Netflix a huge subscriber base and clout in the marketplace that could be applied to the ultimate vision.  And because the near-term model was profitable, it could fund the efforts needed to make the ultimate transition.


Option #3 Changing the Flight Schedule
A third option is to change the scheduling of your flight—prepare to land your plane earlier.  The idea here is that if you start the transformation earlier, before the status quo deteriorates too much, you have many advantages:

Kodak essentially invented the world digital imaging.  They had plenty of time, clout and money to implement the change.  The problem was they waited too long to do anything about it.  If they had scheduled the landing of the digital transformation much earlier, the odds are good that it would have succeeded.


The problem is that companies worry about cannibalization.  After all, the sooner you start the transformation, the quicker you cannibalize the old core.  What you need to realize is that someone is going to eat your core.  Your only real option is to decide whether you are going to do the eating or someone else is going to do the eating.  And if you wait, like Kodak did, and let the competition eat your core, you have no runway to get to the replacement.  All you are is eaten.

SUMMARY
Strategic initiatives usually require change.  Change requires time and money (and usually more than you initially realize).  Therefore, if you want to land your strategy, you’d better make sure there is enough time and money to get the change implemented.  If there isn’t, you will need to adjust your approach to that change by either:


FINAL THOUGHTS
I worked with a company that was running out of runway.  They did not have enough time or money to finish their transition.  The solution they picked was to sell the business to someone with deeper pockets and more time.  In other words, they sold the plane to a company which owned a better airport with a longer runway.  So, before you panic, look for creative ways to get a longer runway.  Creative solutions are out there.
Posted by Gerald Nanninga at 9:19 PM