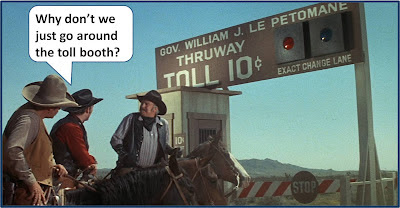 THE STORY
Let’s assume you’re an expert at building doors.  You may be able to create the most beautiful door, or the most technologically advanced door, the most secure door, the highest quality door, or some other type of superlative door.  But if that door doesn’t lead to anything, it’s really rather useless.


The main purpose of a door is to provide a passageway to get from one side of the door to the other.  If there is nothing worth going to on the other side, or if you can get to the other side without using the door, then the door really has no value.


It reminds me of the western comedy movie Blazing Saddles, where a toll booth was placed out in the middle of the desert (see photo above).  There was no road anywhere near the tollbooth.  It just sat out there in the middle of a huge abandoned area.  There was nothing stopping you from getting to the other side by just going around the toll booth (after all, there weren’t any roads anywhere near the toll booth).   Hence, the tollbooth had no value, because you could easily cross the desert by avoiding it.  Yet, the humor in the movie was that the cowboys, as you can see in the picture above, stopped to pay the toll anyway.


So if you want to make a door really valuable, the irony is that you really don’t need to spend much time focusing on the door.  Instead, the door is made most valuable if you focus on two non-door issues:


a) Does the door get you access to something valuable?; and


b) Is it the only way to get to that location?


THE ANALOGY
The digital world is full of doors and destinations.  For example, devices, like smartphones, ipads, computers, gaming devices and cable TV systems can all act like doors.   They are the passageway to get to desirable digital content.


You can even look at digital content as a door.  Although in this case, the purpose of the door often is so that businesses can get access to you.  For example, television shows can be a door to allow brands access to viewers via commercials.  Zynga’s free digital games can be seen as a door to allow Zynga to reach players to sell them game enhancements.  Google’s search results are a powerful door for advertisers wishing to have access to people when a specific subject is on their mind.


a) Get people to a valuable destination?; and


b) Is it the only way (or best way) to get to that destination?


THE PRINCIPLE
The principle of doors is this:  A door is only valuable in its relationship to destinations and those seeking the destinations.  If the door doesn’t lead to a desirable destination, or if there are lots of other doors going to the same destination, then the value of that one door is very small.  Conversely, if you are the one providing exclusive access to something highly desired, then you have a very valuable door.


There are several factors to keep in mind when applying this principle.


1) Choose what you want to be and actively manage it.
Often times, the same digital entity can be positioned as either a door or a destination.  For example, Facebook could be positioned as a door to get to your friends or as a destination where friends want to hang out.  You have a positioning choice to make.  And you had better be clear about that choice so that you know what to do and how you are going to win.


And don’t forget that competitors may want to position you differently than your own choice.  For example, Facebook may want itself to be positioned as a destination, but Google+ may want to re-position Facebook as merely a door and then tell people that Google+ is a superior door for accessing those same friends.  And, if Facebook becomes too abusive in the way it increases monetization of its “destination,” customers may get fed up and migrate to a better door to reach each other.


Similarly, cable TV has traditionally tried to position itself as the destination for TV entertainment.  They even call the content “cable TV” (as if it were theirs), not “TV as seen via cable.” But now, there are all sorts of internet startups, like Hulu who are saying that cable TV is just a door to that entertainment and that the internet can be a superior door to reach that same content.  And the formerly unthinkable is happening—people are cancelling their cable TV and getting that same content through an internet-based door like Hulu.


So the battle is not just in making a one-time positioning choice.  One also needs to continually monitor how the market is positioning you, so that you can control your position.  And as technology and business models evolve, your old positioning strategy may need to be modified from time to time in order to stay relevant.


2) Value depends on which side of the door is most conjested.
Sometimes the door is more valuable than the content (the destination) and sometimes the content is more valuable than the door.   It all depends on the relative congestion on either side of the door.   If the customer side is more congested than the content side, then the content usually has the most power.  This situation occurs when a highly desired movie can only be accessed by a limited number of outlets. There are lots of people rushing to get access to one movie.


In this case, outlets will bid very high to get access to that movie and can often end up giving access to consumers at a loss, hoping to make up for it with sales of popcorn or advertising.  So the strategy for the door to win is to find alternative monetization schemes to exploit all the people coming in at a loss who don’t care about the door.  The strategy for the movie is to raise the bid to access it.


The opposite extreme could be something like You Tube.  There are millions upon millions of inconsequential videos wanting to reach people who have no idea that the content exists.  In this case there are lots of videos rushing to get access to the same people.  Here, the door is disproportionally more powerful because of its role as an aggregator.    Without the help of an aggregator like You Tube, all these videos would find it almost impossible to get the attention of the public.  This puts You tube in the driver’s seat in negotiating how to monetize the content.  So here, a key to the door strategy is to build a superior aggregation tool, making it the easy destination to sort out all the content confusion.


Money can be made in both situations (for both the doors and the destinations), but it is made differently because the power levels are different.  So one of the things one needs to consider in a strategy is which side of the door is the most congested.


3) Have a strategic approach to exclusivity/control
Having the only door to content can be very valuable.  One thousand doors to that content diminish the value of a particular door.  Therefore, control of value for your door means controlling how many other doors other people can make.  If you can tie up content through exclusivity or close up the potential for others to build doors, then you have made yourself more valuable.


One of the keys to Apple’s success is its passion over controlling a relatively closed system.  Apple wants to own all of the doors—the device door (phones, pads, computers, etc.), the apps/iTunes door, rules for how content interacts with those doors, etc.  Apple not only owns all the doors, they try to own the whole house and every room in it.  This closed system forces everyone on a path that benefits Apple.


Now if you are Amazon and you see Apple owning all the doors to content and see Apple’s doors completely bypassing Amazon, you can get justifiably very nervous.  As a result, Amazon needed to aggressively invent and promote its own doors, via Kindle and Amazon Prime, so that an alternative path would become viable.  And the more exclusive content Amazon can tie up, the more viable its path becomes relative to Apple.


Control and exclusivity can also relate to the other side of the door.  The more you can tie up customers into loyalty programs or long-term contracts, the harder it is to get them to try someone else’s door.


So, if the nature of the relationship to content is what makes your door valuable, actively manage that relationship to create as much control and exclusivity as possible.  Create strategies to broaden your door while narrowing others…from both directions.


4) Don’t build the most beautiful door to nowhere
If you only focus on your door and ignore where it leads, you can create a worthless door.  As mentioned earlier, the best door is not necessarily the prettiest one, or the most advanced one or the one with the most features.  It is the one that does the best job of managing the whole relationship on both sides of the door.


Sony has been going through troubled times in recent years.  A lot of that has to do with their heritage of focusing on just making great devices.  In other words, they put all their effort into making great doors rather than a great system connecting all the pieces on both sides of the door.  By thinking devices instead of systems, they are missing out on the best value-making business models.  One reason why Playstation tended to be one of Sony’s better performers was because it was the division with the best systems-based business model.


SUMMARY
In the digital economy, money flows through a system of digital doors.  If you do not exert enough control over the complete system, others will direct the flow through that system so that very little gets to your door.  Therefore, your strategy must take a holistic approach to consider more than just your small piece of the puzzle.  You need to consider how to get your door near desirable content and customers and how to block other doors from doing the same.


FINAL THOUGHTS
Did you ever notice that very little thought is given to real doors?  We take them for granted.  About the only time we think about them is when they are not working properly.  In the digital space, however, one should never take those digital doors for granted.  We need to consider them all the time.
Posted by Gerald Nanninga at 8:02 PM